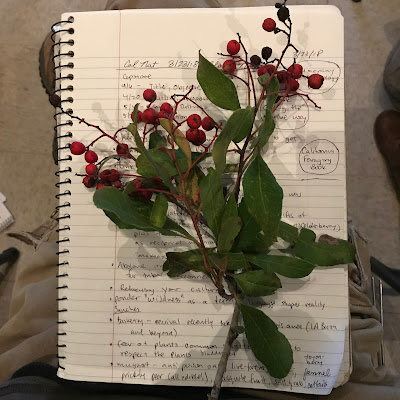 Nature centers have always filled me with fascination and wonder. Libraries have always done the same. Why do these spaces evoke such feelings? At their best, nature centers and libraries fuse knowledge, relationships, and discovery. Combined there is potential for curiosity, connection, and meaning. This is what I felt when our instructor Hillary Holt invited me into the Nature Center at Avalon's resource center library. I would have spent all day exploring its shelves had exploring the island not been on the syllabus -- something I anticipated would offer me lessons in ways no book can. 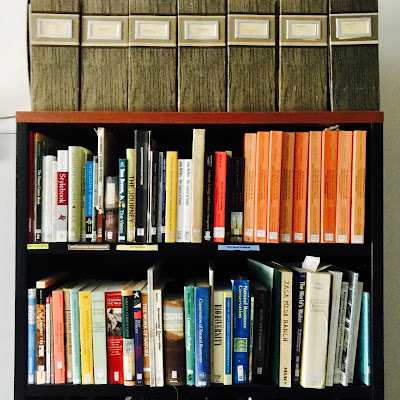 Our class was accompanied by guests who represent native peoples of Catalina, or Pimu as the island is named in the Tongva language. Craig Torres and Abe Sanchez are members of the Chia Cafe Collective and they helped us prepare for our trip into the island's interior by giving us the opportunity to refocus our cultural lenses. For example, we pondered the word "wilderness" in order to shed light on assumptions embedded in our language which, in turn, shape our reality. How might replacing the phrase "natural resources" with "natural relatives" challenge us to recognize fruit, wood, or tree shade as gifts instead of commodities? We considered the fact that many people have a fear of edible plants not found in grocery stores and were encouraged to have respect for plants we encounter: to seek understanding of their ecological benefits even if they are known to cause people harm. By taking responsibility for the interconnected, reciprocal relationships we have with nature we acknowledge we are not separate from nature. As Torres explained, in Tongva culture there is no equivalent word for "nature" given there was never meant to be a separation between the activities of people and the ever changing land upon which they lived (and continue to live).


A couple of years ago I discovered links to live cameras on Catalina. I would stream one overlooking Two Harbors and watch the morning light change while working in my windowless office. The bald eagle live cameras often provided my afternoon inspiration. This year, a pair of eagles has successfully laid an egg at Two Harbors. With any luck, visitors at the Nature Center at Avalon will be able to watch them serve rockfish to an awkward fledgling. An interpretive panel briefly explains the effort which helped reestablish and protect a population of bald eagles on Catalina after loosing all of them to the harm caused by the poisoning of surrounding ocean life they depended on for sustenance. It tells of the noble work done in collaboration by members of the Catalina Island Conservancy and Institute of Wildlife Studies to accomplish the recovery. Today, bald eagles nest every year in many places on the island and their health is regularly monitored. 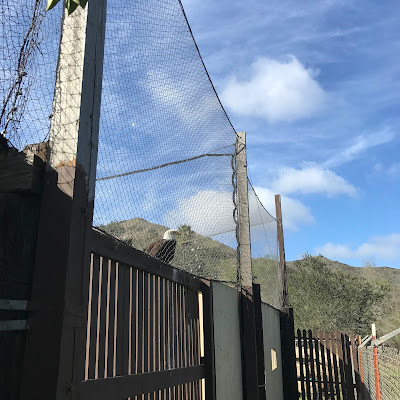 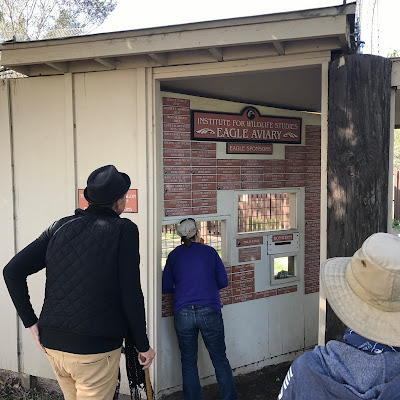 In Tongva the word for eagle is 'ashaawt. For our first stop out in the island's interior, we visited the Eagle Sanctuary near Middle Ranch where Pimu resides in convalescence. She played an important role in the restoration program by serving as an ambassador bald eagle. According to Craig Torres, Tongva mythology tells of a bald eagle who attempted to break the eternal cycle of life and found it impossible because creation is an ongoing process, not a singular moment in the distant past that can be escaped. I pondered this insight as we observed Pimu in her aviary, grateful to be in the presence of a being who helps people acknowledge their power to continue to heal the island and by extension themselves and others. 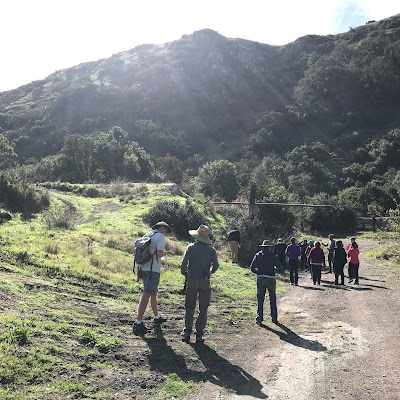 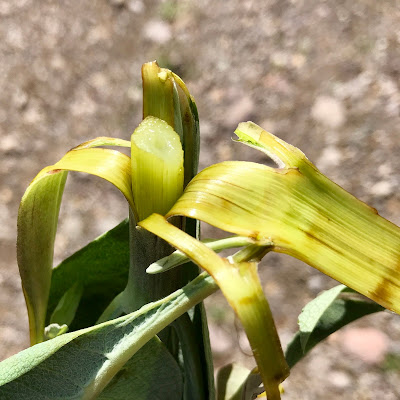 In another location along the dirt road we emptied out of the van and were led to a large white sage (Salvia apiana). Here both Craig Torres and Abe Sanchez spoke of the many relationships found between people, the white sage, and other plants nearby such as California sagebrush (Artemisia californica) and southern cattail (Typha domingensis). We were taught of the importance to ask permission when gathering plants for use and to make an offering in return. Sanchez then removed a thick stalk of the sage and peeled back the skin to expose a fleshy, inner stem. After extolling the antibacterial attributes of the plant he pinched the tip of the stem and ate it. The stalk was passed around for the class to enjoy and when it came to me I found it to be somewhat akin to celery yet more moist and flavorful. Later, before we walked back to the van, I plucked a strand of hair from my head and left it at the base of the sage in thanks.


During our outing we were also accompanied by Wendy Teeter and Karimah Kennedy-Richardson of the Pimu Catalina Island Archaeological Field School. From a vantage point overlooking Shark Harbor and Little Harbor they explained how we stood near the oldest native archaeological site known on the island. We learned how it is theorized to have been a very valuable location for many reasons including the ability to see migrating whales, San Nicholas Island, Santa Barbara Island, the shifting weather patterns, and to access the nearby isthmus (Two Harbors) providing quick access to the north side of the island. Craig Torres complimented this theory by noting the overlapping collaboration between land, ocean, and people in a singular place -- a non-competitive way of life in which the earth and sea are teachers, not conquerable entities. 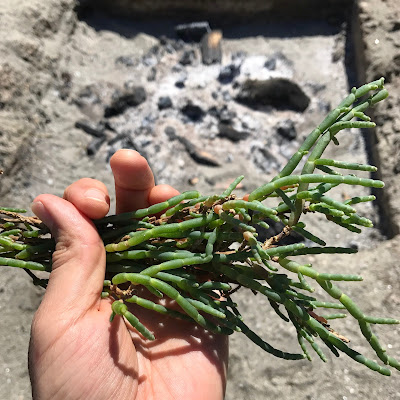 At the Little Harbor campground we all shared lunch around an abandoned fire pit. Abe Sanchez passed around pickleweed (Arthrocnemum subterminale) he had found growing nearby. We had the opportunity to converse freely and at one point I asked how one might view the relationship between people and plants that can be harmful, like poison oak (Toxicodendron diversilobum). Craig Torres reminded me that some plants, while not useful to people directly, are still important to the web of life that supports everything. He also ventured to explain the sacredness of some plants like jimson weed (Datura wrightii) which are used for ceremonial purposes but are otherwise inedible. As I chewed the pickleweed its saltiness brought my attention to the sea in the distance behind Torres while he spoke -- water we cannot drink to survive and yet makes all life possible on Earth. 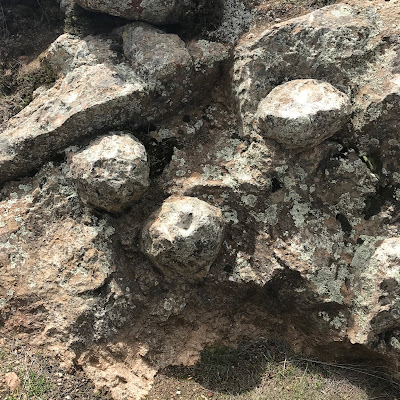 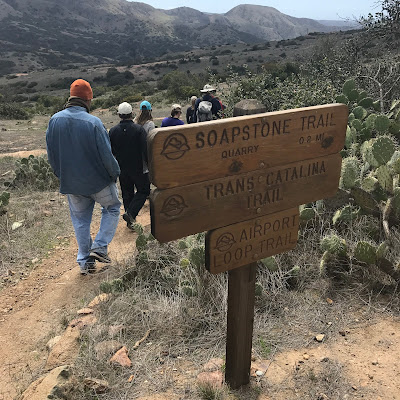 Our final stop was at the Soapstone Quarry near the Airport in the Sky. Here we learned soapstone was used to make bowls just like in other places on the mainland. Yet Pimu soapstone was considered of extraordinary quality. It is not known why this is so. Like so much knowledge lost to colonization, we are left to accept only clues which point to the ways of people who recognized, respected, and took responsibility for the value of the land they lived upon. We might read a whole book about this but a day spent out in the field like our class did reveals there is more to the shared experience of an eagle, a stalk of sage, an ocean overlook, a meal around a fire pit, or an ancient soapstone quarry than any encyclopedia can ever contain. 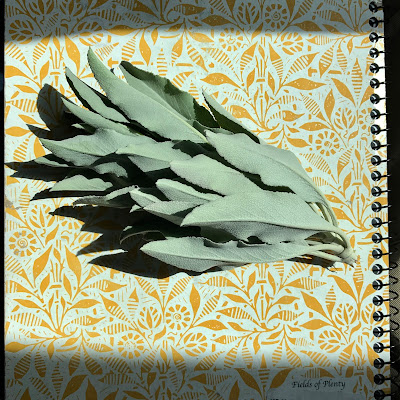